Led by the Boeing Company and PACCAR Inc., the manufacturing industry in Renton is impressive. It not only employs a significant number of people, but the industry advancements and economic impacts are extraordinary.

The Making of a Boeing Airplane

Boeing airplanes that are manufactured at Boeing’s Renton production facility are made in just nine days, and according to the aerospace giant, the 1.1 million square foot facility is the most efficient airplane factory in the world. Each airplane’s journey takes a similar path: A hollow fuselage is transported from Wichita, Kansas to Renton where it undergoes an incredible transformation from a tube into an airplane through nine days of construction, placement, fitting, testing, and inspection.

The production facility is powered by 100% renewable energy (hydroelectricity and wind).

Another noteworthy aviation-related manufacturer is AIM Aerospace, a company that has been producing spec ducting, structural, and internal airline components for more than 30 years. They’re a symbol of aerospace manufacturing excellence, employing over 300 people (City of Renton, 2017).

Alliance Packaging and TrojanLitho employ more than 400 people (City of Renton, 2017), and both are leaders in producing best-in-class packaging products. Alliance Packaging is the Northwest’s largest independent corrugated box manufacturer, and TrojanLitho is one of the country’s leading manufacturers of consumer packaging – working with big box brands like Philips, Kirkland Signature, and Alaskan Brewing. 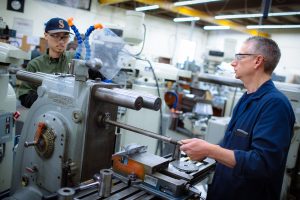 Out of the Box Manufacturing, located in Renton city limits, take a uniquely different approach to manufacturing by intelligently designing innovative and efficient processes that enable us to build faster, better, and smarter than the competition; serving the Aerospace, Medical, Military, Commercial, Industrial, Consumer Electronics, LED Lighting and a comprehensive range of additional industries within the Puget Sound Region and beyond.

PACCAR, Inc. is a global leader in the design and manufacture of high quality, premium trucks. PACCAR is a Fortune 500 company, the oldest continually operating business in Renton, and was recognized by the National Center for Transit Research as one of the best workplaces for commuters. PACCAR has produced more than 130,000 Kenworth trucks since 1993. Globally, the company employs 23,000, with more than 1,100 of those working at the assembly plant in Renton (City of Renton, 2017). 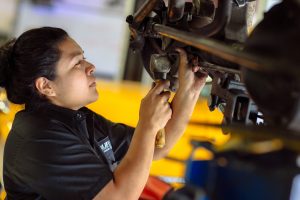 Learn more about incentives and benefits specific to manufacturing businesses.

Connect with Impact Washington to assess your current state and review your manufacturing business.